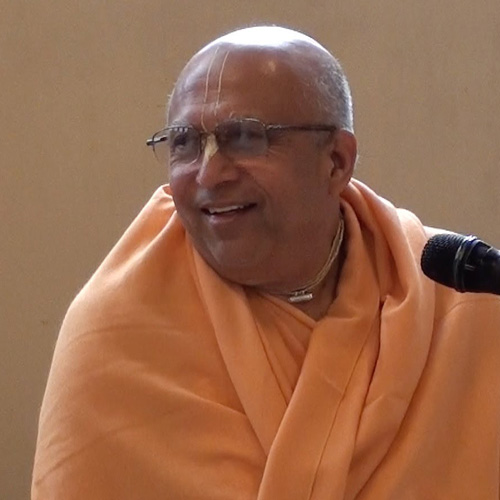 Vedavyasapriya Swami, born in an Audichya Sahasra Brahmana family on 1st August 1944 in the town of Kadod, Gujarat, India, on Sravan Sud Dwadashi, also celebrated as Pavitra Dwadashi, that follows Pavitraropana Ekadashi. His early life was spent in Gujarat, then his family moved to East Africa in the mid 50s, and afterwards he migrated to USA in September 1971.

Vedavyasapriya Maharaja, himself, recollects that he was always more interested in spiritual matters and welfare of the people than in any business matters. As a young adult he made a daily practice of reading Bhagavad-gita slokas, and also studied the sanskrit language during his High-school years.

Vedavyasapriya Swami worked as a research biochemist first in East Africa and then later when he migrated to USA. Within a week of arrival in the USA, he met the devotees, disciples of His Divine Grace, A.C. Bhaktivedanta Srila Prabhupada, the Founder-Acharya of the International Society for Krishna Consciousness (ISKCON).

In 1987 Vedavyasapriya Swami shifted his attention to serving in India following the instruction of Srila Prabhupada that every Indian devotee trained in the West help to serve in India to bring awareness of the bona-fide teachings of the Vedic literatures and worship of Sri Sri Radha Krishna and Sri Sri Gaura Nitai (Sri Chaitanya Mahaprabuu and Sri Nityananda Prabhu, incarnations of Sri Sri Krishna and Balaram).

Since 1991 Vedavyasapriya Swami Maharaja has been based in Vrindavan, India. He has held various administrative positions while continuing to preach and spread the mission of Srila Prabhupada and Lord Chaitanya in India and worldwide and support the Indian communities in many countries around the world. His administrative services in India have included overseeing the functioning of one ashram in Vrindavan and also the Bharatpur Ashram, and wider services as Regional Secretary in Punjab and Haryana, and as Chairman of North Indian Temples Divisional Council for the seven years following its inception.

More recently Vedavyasapriya Swami has served on Regional Governing Body as Zonal secretary for Eastern UP, Bihar and Jharakhand temples for one year.

Since 1998 also Vedavyasapriya Swami has been serving Srila Prabhupada and his movement as a Spiritual Authority in the form of an Initiating Spiritual Master (Diksha Guru), and has been preaching far and wide throughout the world the message of Sri Guru and Sri Krishna.

He is currently free from management duties, making a full commitment to giving spiritual guidance, preaching and teaching. Many devotees around the world know Vedavyasapriya Maharaja’s beloved deities Sri Sri Radha Syamasundara, Who have been traveling world-wide with him for many years.