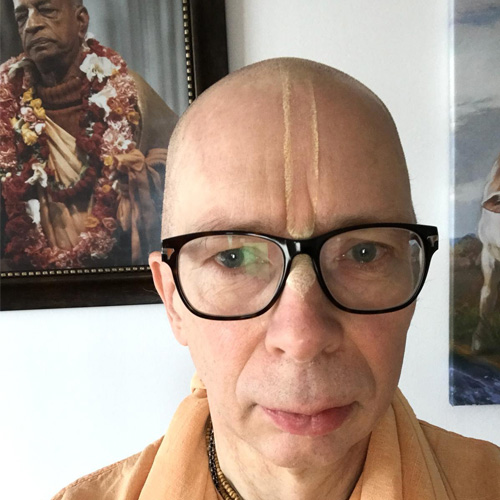 Bhakti Prabhava Swami, born in Belgium, in 1960, met devotees in Ghent in the summer of 1992. From 1992 to 1996 he was active in Nama Hatta preaching in Ghent, and joined the Radhadesh temple in 1996. In 1994 he met His Holiness Bhakti Charu Swami who accepted him as his disciple and gave him first initiation on 12 March 1998 and second initiation on 25 August 1999. On the 31st May 2015 he was Awarded sannyas initiation by Bhakti Charu Swami.

From 1996 to 2007 he engaged in management of the Radhadesh projects, mainly taking care of supervising the administration, tax defence and legal matters. He also served as legal director, trustee, teacher and student in the Bhaktivedanta College. In 2011 he shifted his home base to Leicester (UK) where he introduced the Bhakti Sastri course. Since 2015, Bhakti Prabhava Swami is offering bhakti-sastri and bhaktivaibhava on-line courses.

His Holiness Bhakti Prabhava Swami travels and teaches Srimad Bhagavatam and other bhakti scriptures in ISKCON centres and institutions around Europe since early 2000s, especially in the UK, Ireland, Germany, Ukraine and Bulgaria. He studied Bhaktivaibhava (2001-2005) and Bhaktivedanta (2006-2011) at the VIHE in Vrindavana, earned a PhD in the Study of Religion at the University of Wales (2016) and published a number of academic articles. He currently serves as a member for Sannyasa Ministry and as a member for the ISKCON Board for Examination. Since early 2018 Bhakti Prabhava Swami is serving as Temple President for ISKCON Belfast.

2005 – present: Bhakti-shastri grader approved by the ISKCON Board of Examinations.

1994 – present: Participation in numerous International Conventions, where seminars on Vaisnava culture are taught, such as ISKCON European Convention in Radhadesh (Belgium) and the Mayapur-Vrindavan Festival in India.

1992 – present: systematic personal study of some of the main Vaisnava texts in the Caitanya Vaisnava tradition, such as Bhagavad-gita, Srimad-Bhagavatam, Sri Caitanya Caritamrta, Bhakti-rasamrta-sindhu, to quote a few.

2002 – 2005: Bhaktivaibhava course – study of the first six books of the Srimad Bhagavatam (Bhagavata Purana) at the VIHE in Vrindavana (Uttar Pradesh – India).

1996 – present: trained as a Vaisnava celibate monk by Vaisnava teachers and mentors.

2001 – 2011: development of seminars on the Bhagavad-gita and Srimad Bhagavatam (Bhagavata Purana). Some of the seminar titles:

2011: Presentation “Emotion in Religionen. Negative Emotionen” at the University of Heidelberg (Germany).

2004: Presentation on Bhagavad-gita at the University of Montreal (Canada).

2002 – 2008: Tutor for Bhakti-Shastri and Bhaktivaibhava students in the Caitanya Vaisnava community at Radhadesh and the Bhaktivedanta College in Belgium.

1998 – 2004: Part-time pujari priest in the Caitanya Vaisnava community at Radhadesh in Belgium.

2001 – 2015: Presenting discourses on Bhagavad-gita and Srimad Bhagavatam in assistance of Prahladananda Swami in the Balkan States (Serbia, Macedonia, Bosnia, Bulgaria, Hungary, Slovenia, Croatia, and Romania) since 2001 during 2 months each year.

1998 – 2008: Acting as legal advisor, tax expert, and administrator for the ISKCON legal entities in Belgium.

2003 – 2011: Trustee, teacher, and legal advisor for the Bhaktivedanta College in Radhadesh

2008 – present:  A member of the ISKCON Board of Examinations, and the GBC Finance Committee.

2014 : Secretary for the GBC Executive Committee and the ISKCON GBC Body

2014 : Member of the Standing Committee for the ISKCON Ministry for Education

2014 : Founder member of the ISKCON Leicester for Vaishnava Training and Education (presently: College of Vedic Studies)

2018: TP for Belfast in Northern Ireland