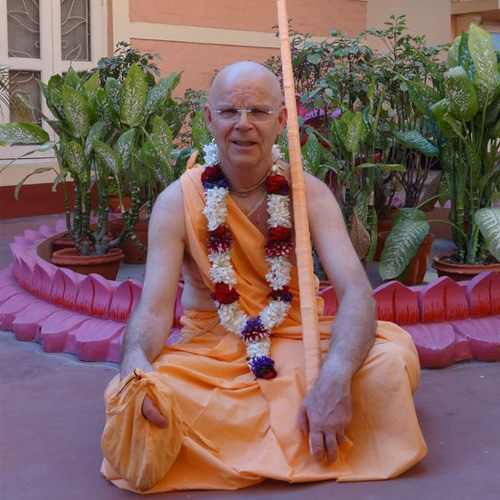 Bhakti Gauravani Goswami born in Germany, in 1951, met devotees in Hamburg in the summer of 1971, while doing mandatory military service. After reading Sri Isopanisad and receiving guidance from Srila Prabhupada’s disciples at ISKCON’s Hamburg temple, he became a vegetarian, shaved his head, and lived (as far as circumstances allowed) a devotional life while still in the army. To help him focus, devotees asked him to translate the Second Canto of Srimad-Bhagavatam into German. Shortly after his discharge, he traveled to Paris in June of 1972 to meet Srila Prabhupada who accepted him as his disciple and gave him the spiritual name Vedavyasa Dasa.

For the next eight years, Vedavyasa translated his spiritual master’s books into German and managed the German BBT. After moving to Spain in 1981, he oversaw the printing for the Spanish BBT and assisted in the administration of the Spanish temples. In 1982, he married a Spanish devotee lady with whom he raised four children.

In 1985, he established the European BBT office of the Spanish and organized the translation and printing of Srila Prabhupada’s books in Spanish. During the next ten years the Srimad-Bhagavatam and several other books were published, and the Sri Caitanya-caritamrita was translated and prepared for publication.

For the occasion of Srila Prabhupada’s centennial celebration, Vedavyasa Dasa wrote and published a book called “Srila Prabhupada and His Disciples in Germany,” which narrates the history of ISKCON Germany from 1969 to 1977 and features the memories of Prabhupada’s disciples.

In 2014, after 32 years of marriage, Vedavyasa Dasa entered into the renounced order of life. On the auspicious day of Gaura Purnima, he received sannyasa initiation and his new name Bhakti Gauravani Goswami from His Holiness Prahladananda Swami in Mayapur-dhama.

At present, Bhakti Gauravani Goswami is the president of the New Vrajamandala farm community and the Euro RGB Commissioner for ISKCON’s activities in Spain. He is also serving as an initiating guru in ISKCON, travelling and preaching in Western Europe, South America and India.